Any practicing neurofeedback clinician knows the name "Barry Sterman, Ph.D.". For some, the name carries a vague connection to published studies involving cats pressing levers, the sensorimotor rhythm (SMR), and/or resilience to seizures. To others that may have had a real-world encounter with Dr. Sterman, the name elicits a boisterous and at times brutally honest personality, both in the academic world and personal interaction. Over the last two years, the BFE's Jon Bale has had the privilege of knowing Dr. Sterman as an entity in the history of neurofeedback to a colleague and friend.


Learn From the Best
Dr. Sterman is considered the original pioneer in the field of EEG biofeedback. His work in the 1960s/70s involving motivation in the cats led to the naming of the observation and naming of the SMR frequency bandwidth, as well as  the framework for providing feedback based on the changes of a subject's mental state. Popular neurofeedback protocols for reduction in seizures by rewarding SMR amplitude, as well as treatment of ADD/ADHD are based directly from his work. A starch academic, his colleagues in the field all know the catch-phrase "show me the data!" as Dr. Sterman's warning to never make a clinical statement without having any published material to back it up.

Sterman Operant Conditioning Suite
As some clinicians are aware, the BFE and Dr. Sterman have been collaborating on the creation of a software suite that embodies his neurofeedback training method. The Sterman Operant Conditioning Suite is a project of almost 2 years in the making, recently features at the Society for the Advancement of Brain Analysis (SABA) conference in Atlanta, USA. Dr. Sterman included an unveiling of the system to the attendees of his presentation, hailing it as what he hopes to be the next stage of neurofeedback training and research. One strength of this application is the ability to examine the post-reinforcement signal (PRS) after rewards, as a true verification if the subject is learning. 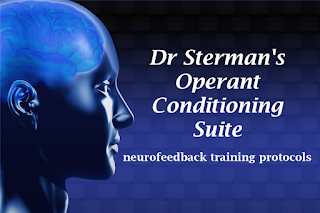 Feel free to learn more about the Sterman Operant Conditioning Suite software here, and join our mailing list to receive future announcements on the Dr. Sterman / BFE collaboration and other BFE news.

Posted by Biofeedback Federation of Europe at 11:07